You are here: Home › Cultural Insights – The Yoruba People
By admin on February 14, 2013 in Uncategorized

In response to requests from members of Watford’s Timebank, a voluntary skills exchange organisation, WACAS co-ordinator Olabisi Onanuga gave a topical presentation to the group on 12th February at the Watford Palace Theatre. There was a good turnout for the event which was splendidly organised by Cheryl Horton, Timebank Manager. 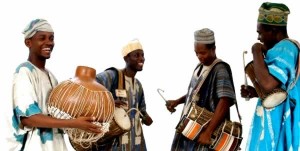 The subject of the presentation was The Yoruba – a people originating from sub-Saharan Africa.  Olabisi firstly spoke about the inherent culture pertaining to language; there are apparently many differing dialects of the original Yoruba tongue which can seem foreign to a native of a neighbouring country of the same tribe.  She also explained the tradition and significance of choosing a name for a new born. Names usually have some reference to the time of year, or season, or even a courageous or sympathetic virtue to see the child through life.

A short video of a traditional Yoruba wedding was then shown with Olabisi giving an explanation of the various elements of the proceedings. The elaborate and colourful ceremony included the reading of a Letter of Intent, the groom prostrating himself in front of the bride’s parents to seek her hand in marriage followed by a joyful celebration of the union with much dancing and merriment.  With regard to the matter of a dowry, it was pointed out that the modern custom is for foodstuff, fruits and fish to be given rather than large sums of money or possessions.

At the questions and comments session, the audience were extremely enthusiastic and engaging.  They all agreed they found the entire presentation thoroughly fascinating and informative – with generous appreciation for Cheryl and Olabisi.

To find out about other WACAS events, remember to sign-up for news, alerts and updates.