You are here: Home › Dragons’ Apprentice Challenge Awards
By admin on March 31, 2013 in Uncategorized

Congratulations to all the Watford pupils that participated in the Dragons’ Apprentice Challenge – the business skills competition which tasked Year 12 students to turn £100 to more than £1,000 for local charities.

The competition, organised by Watford and Three Rivers Trust, connected teenagers with local business mentors or “dragons” and local charities, including the Watford African Caribbean Association. Balancing the challenge with school work, exams and even the weather, the teenagers commitment, dedication and drive were greatly rewarded. Not only did they gain experience in setting up and running a business, they also learned more about the important work undertaken by their designated charity. 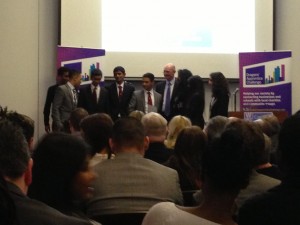 The twelve student teams taking part in the competition collectively raised more than £23,000 – an outstanding effort. At the results ceremony, Team Eagles, the sixth form pupils from the Francis Combe Academy, mentored by David Rees of Smile Events and supported by WACAS were joint winners of the Most Innovative Idea Award. Team Eagles mitigated financial risk by getting their exclusive teenagers clubbing experience fundraiser held at Watford Colosseum underwritten by a third party. The awards were presented by Super Dragons Roger Gagan, Julie Howell, Chris Pichon, Bob Jones and Elected Mayor Dorothy Thornhill.

Once again, well done to all those who took part in the challenge and those who supported the sixth formers.

Move to the Beat of the Drum!
Saturday School sees rise in student numbers in 2013